SOLTECH is proud to be recognized as a Top Workplaces 2022 & Best and Brightest Company to Work For 2022! Learn more

EasyVote needed a solution to provide its staff and temporary workers onsite access to packaging, inventory, distribution, and driving information that facilitates these tasks for an election. The application needed to be simple to use, performant, and available on mobile devices, both iOS and Android, and desktops.

Given the demand variability and seasonality of elections, EasyVote maintains a relatively small internal development team focused on its core products, and often needs to perform customized implementations and integrations for its government clients. For this reason, EasyVote has occasional software development and integration projects that are best achieved with the support of a strong technology partner.

EasyVote needed to supplement their software development team to help them build a software solution.

“You guys have just been great to work with. You’ve done a wonderful job on this app. We’re excited to get it out in the marketplace to our current customers and to help use it to find new customers.”

EasyVote chose SOLTECH to supplement their software development team to evaluate their existing applications and determine the best next steps to build their solution.

After SOLTECH’s evaluation, it was determined that the two legacy mobile applications were non-performant and because of performance problems, rendered unusable. They were built as two separate native mobile apps requiring double the overhead of maintenance and support compared to having a single unified mobile app experience that controls access to the various functions through user permissions. As a result, their Warehouse Mobile App and Driver App were consolidated into a single application where certain user roles controlled the access to specific application features.

EasyVote worked with the SOLTECH team to build a new mobile application to replace their older Warehouse Mobile App and the Driver Mobile App. Initial versions of these applications are reaching end-of-life and EasyVote is now ready to proceed with the implementation of the newly designed replacement solution.

Because performance was a priority in the new app design, careful attention was taken to ensure an intuitive, easy-to-use interface and workflow while maximizing performance and usability. SOLTECH went through several rounds of UX design to make sure that the user experience was optimal.

In addition, due to media hype around election integrity, careful attention was also paid to the security aspects of the final solution. SOLTECH spent time ensuring the new applications and platform would pass commercial security audits.

EasyVote now has a newly designed solution to replace its legacy apps. Their new application has enhanced usability and optimized speed, features, and functions making it easy and more efficient to use. 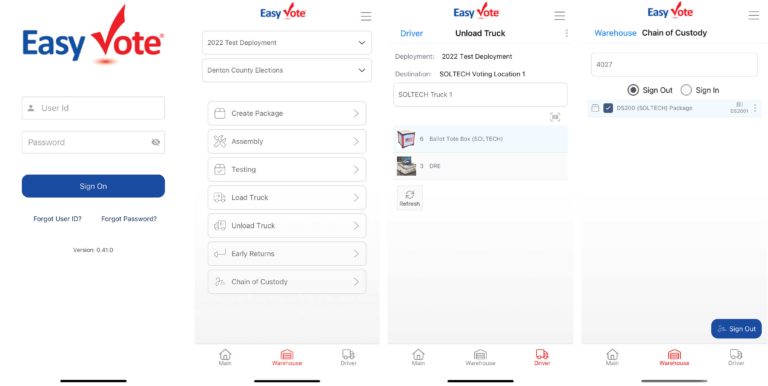 Let us design and build your software

Ready for the next step in your digital transformation? Work with our innovative team to create your software solutions.